This ESTA can be easily applied for online. It’s mandatory to possess an ESTA document when you’re at the airport of departure. When boarding, you won’t just be asked for identification, but also for a valid ESTA. If a passenger cannot present it, the airline cannot transport them. It’s very important that during the ESTA application, you pay extra attention to digits and letters.

Digits and letters in the passport number 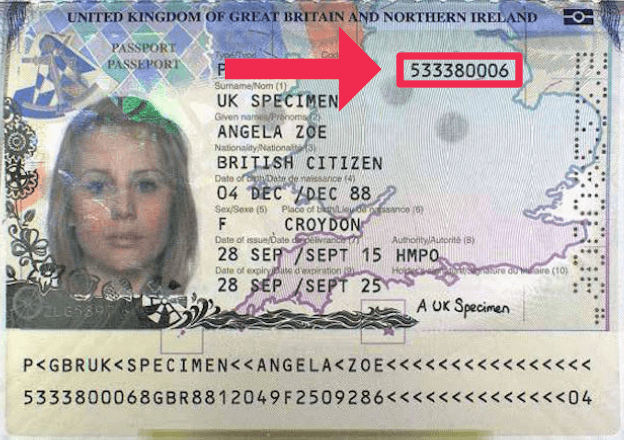 The passport number on a British passport

The passport number doesn’t just need to be correctly written down for the ESTA application, you also need it when booking your trip and flight ticket. That’s why more and more transport companies use an app, with which the traveller can scan their passport. This way, any confusion can be avoided.

Validity of the ESTA

Before travelling to the United States, it’s not just important to get the ESTA in order. The other forms of identification also need to be valid. The passport needs to be valid for the entirety of your stay in the USA. If the passport with which you plan to travel expires, the ESTA expires alongside it right away. You will then first need to apply for a new passport, before applying for a new ESTA. You can’t just apply for a new ESTA; not until you’ve acquired a new passport. British passports are generally valid for 10 years (adults) or five years (minors). If you notice the expiration date is close, apply for a new passport on time to avoid any trouble with your ESTA.

When applying for an ESTA, avoid commonly made mistakes like writing down an ‘o’ instead of a ‘0’. It’s extremely important that all the information is fully and correctly written down for an ESTA application. Failure to do so will lead to the ESTA being declared invalid. An ESTA application costs £29,95 per person. The application takes about five minutes. Airlines check beforehand whether the passport and the ESTA are valid. If either of them are invalid, the airline cannot take the traveller along to the USA. In that case, the traveller has to book a new flight. Avoid problems like that and double-check all the information on the passport and the ESTA application.